"The Tigers will jump into the SEC fray with a lot of questions in the 2013 season – not always the best predicament to be in when going into a monster conference like the SEC. But they’ll lose two starting pitchers from the weekend rotation and their strength up the middle in catcher Ben Turner, SS Eric Garcia and CF Blake Brown." (Eric Sorenson, College Baseball Today)


You'd think College Baseball experts who write pre-season previews wouldn't pay so much attention to who has left a team and pay more attention to who is stepping up to take their place. That is the nature of college baseball,after all. I suspect it's because they're trying to preview all 298 D-I teams and there's no way they can know all that much about all the new and up-and-coming players for all those teams. So we'll give 'em a break.

And we'll give 'em what they need to know. What does the 2013 version of Mizzou Baseball look like?

Actually, I'm pretty sure that at this point even the coaching staff doesn't know for sure what the regular starting lineup is going to look like.  Dane Opel, Scott Sommerfeld, Dillon Everett, and Kendall Keeton appear to be sure bets as starters - although the specific positions they'll play may still be open to question.  Shane Segovia is supposed to be in that sure-bet list, but he's nursing an injured hamstring.

Here at SimmonsField.com we've been reading the tea leaves, sifting through the flotsam and jetsam that washes up on the shores of Google and Twitter, in search of clues.  It's kind of like putting together a puzzle without the picture on the box cover.

For the most part the battle for the starting job has been between sophomore Patrick Quintanilla (Ben Turner's chief backup in 2012), sophomore Jake Ivory, and an junior Dylan Kelly (a JuCo transfer from Georgia). As opening day gets closer, the Tribune says Kelly and Ivory will both get plenty of opportunities to start early in the season, while KBIA says Quintanilla and Kelly will share the job. The 2013 Mizzou Baseball Media Guide says, "After fall ball, junior Dylan Kelly appears to be the top option for the Tigres at the backstop as he is a lefty with plus tools both as a hitter and defender."

As always, though, whoever is the most consistent both in productive offense, behind-the-plate defense, and pitcher-handling will likely win out as the chief starter. Senior Justin Byrd appears to be the #4 catcher at this point.

Junior Dillon Everett is the only returning regular starter from the 2012 infield.  Everett had a great fall and will almost certainly anchor the infield at 2nd base.

Junior Shane Segovia (JuCo transfer from Texas) has impressed everyone with his bat and with his glove, and was tabbed by Tim Jamieson as "hands down" a guy who will be a starter, either at third or shortstop. Unfortunately, Segovia pulled a hamstring just two weeks before opening day, and will likely be delayed in being put into the active lineup.
Steele will play first or third for the Tigers, but with the Feb. 15 season opener looming, the infield competition has become a bit muddled. Shane Segovia, penciled in as the starting shortstop, has a pulled hamstring and is questionable for opening weekend. 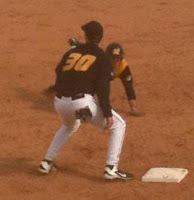 Junior Keaton Steele (the MVP of the 2012 Junior College World Series) is expected to be a starter at either 1st or 3rd.

Another JuCo Junior, Kendall Keeton, and Seniors Mike McGraw and  Gavin Stark will also likely get time in the starting infield early on, at least until Segovia returns and someone becomes the 5th wheel.

Freshman Josh Lester, another Georgia product who has gotten the attention of the coaching staff, could take advantage of some early playing time in the absence of Segovia, and earn himself a more permanent role on the left side of the infield.

Sophomore middle infielder Nick Moore may also get some innings off the bench.  A pair of infielders-turned-outfielders, Senior Scott Sommerfeld and Sophomore Case Munson, could move in to help out if needed.

Seniors Dane Opel and Scott Sommerfeld are the two names being talked about the most as sure bets in the outfield. Sophomore Case Munson has been shifted into to the outfield and seems to be competing with Sophomore JuCo transfer Logan Pearson for the third starting spot at this point. Juniors Sal Belfonte and Brannon Champagne, and Freshman Sean Ullrich round out the OF depth chart and add to the competition for the daily starts. The Designated of the Day will likely be chosen from whoever has the hot bat among the outfielders not starting on that particular day.

Roster Cuts pending:  At the First Pitch Celebration on Saturday 38 players were introduced.  This weekend there were 38 players on the Tiger roster posted at mutigers.com.  According to the NCAA Division I Manual, the roster limit for Baseball is 35.  This limit has to be reached by the day before beginning of regular season play.

Email ThisBlogThis!Share to TwitterShare to FacebookShare to Pinterest
Labels: 2013, Roster