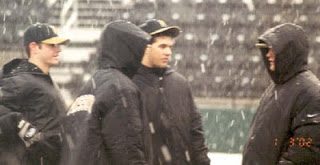 Yes, Missouri is now the northernmost and coldest location in SEC Baseball.

From our perspective, the potential for cold and harsh weather in March and April isn't grounds for excuse making.  It's an opportunity for home field advantage.  If we wanted to use the cold weather as an excuse, we'd have moved to the B1G Ten, like Nebraska.

Those of us who have been coming to Mizzou Baseball games for a long time take a perverse pleasure and pride in the conditions we have endured for the sake of the game.  Some of my most cherished memories at Simmons Field are related to the weather.
Actually, the most extreme weather the Baseball Tigers have endured has been at places other than their home turf.  I can remember twice when a game has been interrupted by tornadoes touching down in very near proximity to the ballpark . . . in O'Fallon, MO (near St. Louis) and in Norman , Oklahoma this past season.  I'm told the heat in Arizona's new stadium at the 2012 Tucson Regional was more daunting than any adverse conditions at Taylor Stadium.  And for several consecutive years the Tigers began their season playing a tournaments in the minor league complexes in Arizona only to lose games to torrential rainfall in one of the driest states in the nation.

One of the most common comments I've heard about the difficulties Mizzou Baseball will face in the SEC is that they will be the only cold-weather school in a warm-weather conference.

Missouri certainly will be the northernmost school in the SEC.  The stats below demonstrate that the difference is not as large as it might seem, though, between Columbia, MO, and Lexington, Fayetteville, Knoxville and Nashville.

The information below demonstrates that while Columbia, MO is, on average, the coolest SEC location in the SEC during the college baseball season, there are other schools that are not much better off.  Then again, the next two coolest SEC towns are the site of perpetual SEC Baseball cellar dwellers Kentucky and Tennessee.

An alternate way of looking at these numbers, though, is that Mizzou recruits can be guaranteed to play a large number of their conference games at warm-weather sites.  And recruits from Mizzou's most fertile recruiting areas (Missouri, Illinois, Kansas, Iowa, Minnesota, Wisconsin, the Chicago area) may actually prefer to play in what they will see as moderate Missouri rather than down in teh Sun Belt.

Each school is listed below with their hometown and the Average HIGH, Average LOW and Average precipitation during the months of the college baseball season.  Also I've calculated an average of those Highs and Lows.  Obviously this is not a true average temperature during those four months, but serves us as a simple number for comparison.   Schools are listed from warmest to coolest.  Source: Weather.com