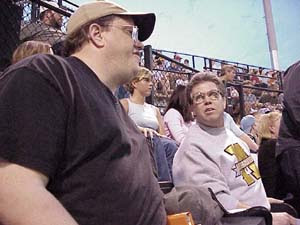 Q: What official connection is there between this website and the University of Missouri Athletic Department?

A: None at all. SimmonsField.com is an independent, fan-based website, with no official connections to the University of Missouri. The Athletic Department alternately praises what I do on this site or grinds their teeth at my shenanigans. The opinions and rants expressed on the pages of this Web Community are the sole responsibility of the site's host, Trripleplay.

Q: So who is this "Trripleplay" that hosts this site?

A: "Trripleplay" is the internet alias of Tim Robertson, a fan of Mizzou Baseball. That's me in the photo, with the ball cap on. The guy with me is Rickie, a fellow Section E heckler.

Q: How can I get in touch with "Trripleplay"?

A: Tim Robertson's e-mail address is: simmonsfield@hotmail.com. Also, you can find me at nearly every home game, usually sitting in Section E, Row 4, Seat 1.

Q: Why did you start this site in the first place?

A: The real reason I started this site was to alleviate boredom during the long off-season between May and February.

I also started this site to fill in the gaps not covered by the official MU site (http://www.mutigers.com/). My intention is not to compete with the official site, but to complement it. I have not attempted to duplicate most of the features on that site, other than the Schedule and Roster.

To learn more about my philosophy about MU Baseball and being a fan, check out Confessions of a Fan of the Game.

Q: So why don't you know how to spell tripleplay? What's with the two r's?

A: Believe it or not, this is actually THE most frequently asked question about this site. Hopefully this does not indicate a lack of interest in anything else here. The answer is simple: the host's name is Timothy R. Robertson, sometimes called TR Robertson. Thus, when I was trying to think up an online nickname several years ago, TRRipleplay seemed to fit my name and my passion.

Q: Why don't you get a Press Pass so you can go on the field and interview coaches and players for the site.

A: For one thing, while I am a part-time free-lance writer, I'm not trained in journalism, and am glad to leave that job in the capable hands of the folks from the Tribune and Missourian and Maneater, etc.

Also, as a friend of mine found out, when you're wearing a press pass you suddenly feel limited in how much heckling you can do.

I'm just a fan, and even when there's snow blowing across the field, I'd rather be sitting down there in Section E, freezing, than up in the sealed-off press box. When this site gets in the way of having fun at the ballpark, that's the day I quit. The site, I mean, not baseball.

Q: Why do I keep doing this when it takes up so much of my time?