On January 22, 2010, the 1964 Mizzou Baseball team will be inducted into the Mizzou Athletics Hall of Fame.

The Missouri Tigers Roster at the beginning of the 1964 Season:

• MU began the season with a 3-3 road trip, but the pitching staff was already showing signs of being great, posting a 1.34 ERA

• April 24: Jack Stroud struck out 17 against the Kansas State Wildcats and came just one scratch-hit away from a no-hitter

• May 24: JackStroud sets a new MU season strikeout record, striking out 10 against the Jayhawks for a season total of 79.

• The Tigers won the last 21 straight games of the season

• Mizzou beat St. Louis U in a Fifth Distrcit Playoff series, to advance to the College World Series, the Tigers' 6th appearance at Omaha.

■ Holding on to a record (KOMU.com)

"I think our weight room consisted of two bricks out of the foundation of Brewer Fieldhouse," said Missouri Pitcher (1963-65) Jack Stroud.

Stroud is still proud of his past, "I tell you, it was probably the best pitching staff in college baseball history."
. . .
According to the NCAA record books, the 1964 team only gave up 19 earned runs in 264 innings the entire season. It comes out to an ERA of .65, which is still the best season in NCAA history. 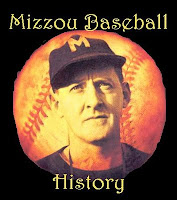 May well be the greatest pitcher in Missouri's long and glorious baseball history. In 1964, he set the MU record for earned run average (0.56), won 11 games and struck out 90 batters as the Tigers went 26-5-1 and advanced to the College World Series. Those 11 wins are still tied for the school record, and the strikeout total stood as the MU record for 26 years. His ERA contributed to a team figure of 0.65 that still stands as the NCAA record, and in this era of the aluminum bat, will probably never be broken. Weber, from Jefferson City, was all-Big Eight, all-District V and all-America in 1964, and signed with the New York Mets. He was also a quarterback in football, but injuries ended his career before he competed on the varsity level. Weber now lives in Kansas City.

■ Players from the 1964 team who played in the Major Leagues