SEC Fan's Guide to Mizzou Baseball: A Weekend in CoMo

What's there to do in Columbia, MO (often referred to as CoMo) on a baseball weekend?

♦ Take in some other sports action:  Mizzou Basketball is already in the post-season by the time baseball's conference schedule rolls around, but you may be lucky enough to catch some other sports scheduled in town - often within a short walk from Simmons Field
♦ Places to go, things to do:  Sure, you can go to the mall, but why do the same things you can do back home?  CoMo has some unique entertainment venues to check out: 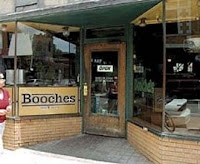 ♦ Columbia's unique dining opportunities.   Like any college town, CoMo has a plethora of chain restaurants and fast food joints.  But if you want the true CoMo experience, check out these places:
♦ Also check out The SEC Guide to Missouri's Home Turf, which lists many good options for food and fun in CoMo.


When you're in Columbia, Mo., you definitely need to make it to Booches on 9th Street. A pool hall that serves the best burgers I've ever tasted. Cash only. Notable for the sign in the front that says "Closed Sunday, see you in church."

♦ Also check out the Columbia Daily Tribune's annual Our Town issue, with nearly everything you could possibly want to know about Columbia.