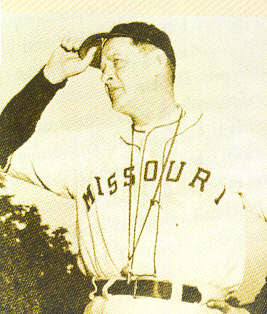 It's time for our year end awards, named in honor of John "Hi" Simmons' signature gesture.

He's so good, we named a play after him:

The baseball approaches. He steps toward the ball and starts his dash for first base at the same time. He directs the ball to just the right spot. The catcher hustles out for it. The pitcher twirls and tries to pounce on it. The first baseman doesn't know whether to go for the ball or protect the base.

It doesn't matter. By the time someone - anyone - comes up with the ball, Jayce is already crossing first base.

They look kind of stupid out there, don't they?


Enforcers of the Year

One of the Unwritten Rules of College Baseball is: Don't stand at home plate and admire your home run.

Brad Flanders made me happy, along with many other baseball purists, on May 4th when he gave Oklahoma State's Jose Virgil a push from behind to start him on his way toward first base after he posed at home, admiring his home run.

Mark Alexander, the Tiger pitcher who gave up the home run, proceeded to hit the next batter, which caused a bit of a stir and prompted warnings from the umpire.

Alexander was replaced on the mound by Stephan Holst. Stephan, a mild-mannered player who pitched just enough innings in 2003 to disqualify himself for being red-shirted, had the misfortune to hit the fourth batter he faced, thereby managing to get himself - and Coach Jamieson - tossed from the game and suspended. Stephan's suspension lasted over several games, which, considering that was only his fifth appearance, for a total of 10 innings, didn't change his plans much.


The Year of the Transfer

In the summer of 2002, it began to look as though the Tigers were going to be short a few players. With several transfers after last season, especially among the infielders and catching crew, would there be enough able bodies to fill out the roster?

Little did we know that 2003 would be the Year of the Transfer. Brad Flanders, Ian Kinsler, Andy Shipman, Danny Hill, Kyle Johnson and Jeremy Hernandez: Where would the Tigers have been without this group of newcomers?

They most likely would not have been in Oklahoma City or Starkville, Mississippi, at the end of May.

Best inauguration of a ballpark give-away

The marketing folks in the MU Athletic Department like to entice fans to the ballpark by giving away free stuff. Hamburgers for home runs, tacos for the correct trivia answers, free T-shirts for the lucky number, a free miniature Coke for a returned foul ball.

On Wednesday, March 12th, not only was it $1 Hot Dog & Coke night, but they unveiled a new give-away: The Harpo's Grand Slam Inning. If any MU player hits a grand slam in this inning, they promised, a lucky fan will win a gift certificate to Harpo's.

We all laughed, of course. What are the odds of a player hitting a grand slam in that particular inning?

Shortly thereafter, however, Kyle Johnson came up to bat with the bases loade and...hit a Grand Slam!!

Johnson would hit another grand slam against Baylor a month later - accounting for the only two slams hit by the Tigers in 2003. But that first one would be the only one hit in the "Grand Slam Inning".


For Love of the Game

He was a Mizzou tailback. Football Coach Gary Pinkel liked him for his speed and his heart.

The problem is, Tyrone Roberson's heart wasn't on the football field. It was on the baseball diamond. And so he gave up the pigskin and took up the horsehide full-time.

Actually, that's not the truth. Tyrone Roberson's heart belongs to Someone else.

“The Lord inspired me to make this decision, and I know baseball is what He has planned for me,” Roberson said. “It would have been nice to play both sports every year, but sometimes someone else has a plan for you. And I’m going to follow it.”

I'll never forget the day in 1998 when senior pitcher Jay Bell took the mound against the Jayhawks in a mid-week game and pitched one of the quickest, most dominating shutouts I've ever seen. When teh game was over and everyone was celebrating, my son asked me what was the big deal.

I proceeded to explain to him the depth of the rivalry between MU and KU. He's been a diehard Beaker-hater ever since.

And so, we honor Jay Bell by invoking his memory as we honor the best performance against the Jayhawks.

This year, the winner of the award has to be the entire Tiger team, who swept the Jayhawks in Simmons Field, then rubbed it in at the Big XII Tournament by beating Kansas and eliminating them from the tournament.

And, once again, the smiles on the faces of Tiger fans were beaming.

Tony Piazza, Catcher for the Southwest Missouri State Bears, not only has the same last name as a famous major leaguer, but he also is perhaps the biggest slob I've seen on a ball field in a long time. His shirt-tail was hanging out, making him look like Pig-Pen on a Little League field. Even the umpire got on his case about it. His loose shirt-tail was not really surprising, though, since he is also the worst fidgeter we saw, shrugging and shaking and wiggling like a crazed man during each plate appearance.

Piazza was drafted this week. Something tells me his minor league coaches will make him tuck his shirt in.

We should call this Bill Davis award, but "Balking Bill" seemed to settle down a bit this year.

This year's award is a tie.

Larry Donovan, who is a close second to Bill Davis in number of Tiger games umpired, wins on the basis of having a strike zone that moves around so much he owns stock in U-Haul.

Chris Koskie also gets a share of this award, for being the annual patsy to work home plate for Mizzou's game at Southwest Missouri State. Word has it that any umpire who doesn't slant his calls of an SMS home game never gets invited back to wear the blue for the Bears.

The enitre left side of the infield, from 3B Zane Taylor (22 errors) to SS Ian Kinsler (16 errors) to 2B Jeremy Hernandez (17 errors). It seems every year that the most errors on nearly any college baseball team belong to someone at these three positions. And we name this award in memory of the Boston Red Sox 1st-baseman who will forever be remembered for one huge error, rather than for his many years as an excellent major league fielder.


Most over-looked and under-rated Tiger

Freshman Adam Garrett, dismissively referred to as "Little" Adam Garrett by Tex Little for the entire season. Even Adam understood his situation, being a shortstop on the same team as Ian Kinsler.

The only chance he really got all year to show what he could do was when Kinsler was benched for a couple weeks with an injury. During those games, Garrett showed he could field the shortstop position as well as anyone, and displayed impressie skill with the bat.

In fact, Adam's opportunity came during the Tigers' 13-game winning streak, and he posted an impressive .619 batting average against Big XII competition, a number which still is #1 on the stats list for all Big XII players, regardless of at-bat minimums.

Somehow, though, after Kinsler returned from the injury list, Garrett disappeared.

While the regular second baseman suffered a hitting slump in the latter part of the season, Garrett rode the bench.

While the three left-side infielders racked up more and more errors, Garrett rode the bench.

While the two leading designated hitters (other than regular starters in the field who sometimes played DH) hit .317 and .248, Garrett and his .449 average rode the bench.

Imagine how the last four years would have been different if "Little" Jayce Tingler had spent his freshman season riding the bench.

The official stats are deceiving in regard to base-running flubs. Pick-offs and Caught-stealing account for only part of basepath problems the Tigers experienced in 2003. A number of innings were end prematurely by base-running choices out of the "Twilight Zone". Shortstop Ian Kinsler distinguished himself above his fellow road-kill candidates during the Texas series, and never let go of his claim to the title of Base Cadet.

Two players spent a lot of time sitting the bench at the cafe is 2003:

Lee Laskowski should have known the fates were against him when his picture appeared on the official 2003 schedules and posters, identifying the Tiger Junior as "Sophomore Lee Laskowski". That proved to be the least of his problems, though, as major back problems continually hampered him and sidelined, until finally he was scratched from the lineup for good. What had been a season with the hope of finishing as a high draft pick turned into a wash-out.

Our best wishes to Lee. We certainly hope he gets "back" into shape and can return as a leader on the Tiger team in 2004.

Brent Lacy also was the victim of bad luck this year, of another kind. In 2002, Lacy became the #1 Tiger catcher when one catcher after another went down to injuries. Lacy was the iron man of the Tigers, catching game after game, even enduring pain from his own injuries in order to show up for work at the plate.

Lacy's bad luck came in the form of Brad Flanders, who stepped onto Simmons Field last fall and immediately began to lay calim to the starting catcher's job. Brent Lacy found himself watching while someone else was a starter at his position.

Lacy was a gracious backup, though. Never without a smile, Lacy became one of the loudest voices in the dugout, a bench-jockey cheering his team along.

He led the team in saves with 8. He could blow batters away at times - he struck out 27 batters in 28.1 innings. He was an honorable mention to the All-Big XII team.

And he always made it "interesting" (that's not my word - it was used by a fellow Tiger player to describe Wendte's pitching appearances).

In those 28 innings he had allowed 37 hits, walked 9, threw 5 wild pitches, got called for 1 balk, allowed 2 triples and 2 home runs, and somehow finished the year with an impressive 3.45 ERA, the best on the team.


Stand by your son

A Tip of the Cap to Steve and Diana Tingler, who have faithfully occupied their seats in Section B for four years. I've always been impressed by how they have warmly welcomed fans of the visiting teams who always sat near them in Sections A & B.

Karen Rallo wins the PTA Organizer award, for organizing tailgate parties and other activities for Tiger parents and other fans. She and husband Mike are the defacto leaders of the parents, having been rooting on their sons since Ryan's older brother Mike arrived on the MU campus in the Fall of 1996

My pick for the top media personality covering the Tigers in 2003 is Ryan Pickett. When "Pick" was named to be Tex Little's radio side-kick, I was frankly dubious. They call the catcher's gear the "tools of ignorance" for a reason, you know. But Ryan turned out to be great at the job. His knoweldge of the game and of the Tiger players is always evident, and he has a friendly and casual way of sharing his knowledge with listeners that makes you feel like he's sitting next to you in the stands, just talking about the game. Good job, Pick!