FAQ: Listening to the Games 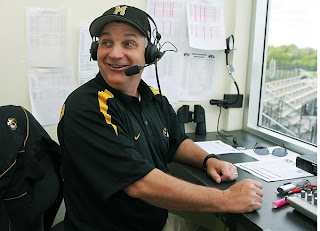 The Zimmer Radio Group signed a contract to be the official broadcaster of all MU Athletics starting with the 2010-2011 season.

Of course, they have been the official home of MU Baseball for some years now. They will broadcast all 2011 games live on KTGR 1580 AM. KTGR is the ESPN Radio affiliate for Columbia.
In addition, they will also be broadcast on FM 100.5 in Columbia, which has been transformed into an FM simulcast for KTGR. 100.5 has a much broader footprint of coverage throughout mid-Missouri, and should provide a better signal at night than the AM counterpart. During the Cardinal Baseball season, Mizzou Baseball games will be bumped aside for Cardinal games on FM 100.5, but will still be carried at AM 1580.

Broadcasts are scheduled to begin 20 minutes before game time with a pre-game show, and will conclude with a 15 minute post-game show.

Tex Little enters his 20th year as the play-by-play Voice of the Tigers. Tex manned the radio microphone for the Baseball Tigers for 12 years, through 1998, and has done the same for the past 7 years. His knowledge of MU Baseball history is a great asset.

Hunter Mense, former Tiger outfielder, will be in the booth with Tex for the 2011 season, providing color commentary and keeping Tex from breaking the electronic gadgetry in the booth.

The KTGR radio broadcasts can also be accessed through the internet. To tune in the Tigers online, go to the Streaming Audio link at KTGR.com, or go to the mutigers.com Schedule Page and click on the Audio Broadcast link for each day's game.