The Missouri - Kansas rivalry is among the oldest and most fierce in all college sports.

A good retelling of the history of the rivalry (albeit from a football point of view) can be found at A Look Back on the MU-KU Football Rivalry at RockMNation.com.

Missouri's US Senator Claire McCaskill was quoted as saying that even if Mizzou switches to a new conference, the Tigers need to make sure they schedule games against at least one traditional rival — Kansas. She said she's not sure "how the world could go on without the MU-KU fight." (AP, October 18, 2011)

Pretty much everyone at Mizzou - fans, coaches, administration - are in favor of continuing the MU-KU rivalry as a non-conference rivalry, in the tradition of Georgia-Georgia Tech, LSU-Tulane, etc.

But the Kansas administration and coaches have taken a hard line against it.  Another way to describe this would be that they've thrown a hissy fit and swept the dust off their ruby slippers.

The rivalry has been no less intense on the baseball field over the years.

More than once, KU Head Coach Ritch Price refused to let his team go out and do after-game handshakes because he was so ticked off at Mizzou.

In recent years, the focus of the Mizzou hecklers has been on Ritch Price and his almost-endless supply of sons who have played for dear old dad.

The last boy is finally gone, though, which prompted this classy response to a question during the 2011 Preseason Big 12 Baseball Coaches Teleconference:


Q: Ritch, I gotta ask you. What's it gonna be like, not coaching a Price?

A: It's definitely going to be different. I jokingly tell people, If my wife hadn't cut me off, I'd have a lot better team.

The Price boys conducted themselves on the field as though they were daddy's favorite players and should be treated as such.

No incident demonstrates the Price Wars better than The Fight: 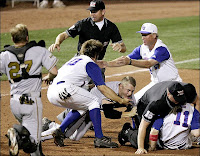 
In a road rendition of the Border Showdown, bad blood spilled in the second inning when KU's Ryne Price, rounding the bases during a home-run trot, dipped a shoulder into Missouri third baseman Brock Bond.

The two players locked up and soon were on the ground scuffling. Players from both schools immediately scurried to the scene from positions, the dugouts and the outfield bullpens. Fists were flying in some confrontations.

Several players had to be restrained by teammates as the two sides faced off near the Kansas dugout . . .

Mizzou has always recruited in Kansas, not just in the Kansas City area, but on toward Topeka as well.  Aaron Crow came from the Topeka area to Mizzou.  With MU going to the SEC, it won't surprise me at all to see Tim Jamieson and company recruit even more zealously in Kansas, enticing players that may have grown up rooting for Kansas, Kansas State and Wichita State, but now might be interested in playing in the SEC.

No discussion of KU Baseball suckage would be complete without yet another posting of this infamous video, which the perpetrators removed from the internet . . . except for my copy.  Enjoy.