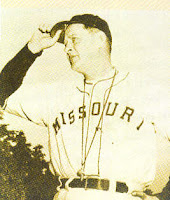 At Saturday's First Pitch Celebration, 38 players were introduced.  The roster on mutigers.com now lists 35,  the mandated limit for roster size.  Missing from the list are Senior LHP Kyle Barbeck, Sophomore LHP Tyler House, and Junior RHP Jeff Oracion.  Here's a SimmonsField.com Tip of the Cap to those three Tigers, for all the effort they've put in.  There may be a Jake Walsh in that group.


The SEC is pretty good in football, right?

Anyone familiar with the SEC has heard the laundry list of achievements experienced in football. Seven straight National Championships, the reigning Heisman Trophy winner and unmatched depth. Many argue that this year was the SEC's most dominant, with at one point six of the top nine teams in the Bowl Championship Series standings coming from this conference.

Consider this though. Is the SEC just as dominant in baseball?

SEC baseball teams have won nine of the last 22 national championships, having finished runner-up six times during that span. That includes South Carolina in 2012, which fell two wins short of winning their third straight title. Although LSU and the Gamecocks have won eight of those championships, this isn't a case of two teams dominating while the rest coast on that reputation...


BOTTOM LINE FOR BASEBALL: The rich get richer with these additions...So while Mizzou should reap some recruiting advantages by moving to the league's best conference, this move is a net loss for it...

Only 3 days until the end of the Pre-Season Season


Check out Eric Sorenson's first "Baldcast" video of the season. He talks about the new RPI formula that rewards wins on the road.

♦ And the absurdity begins, before a single game has even been played: 2013 NCAA Baseball Preseason Regional Projections (College Baseball Daily)


The season hasn’t kicked off yet but it is time to start looking at how a potential 64 team bracket would look right now based on our preseason expectations of each conference. The last two years, we have hit on 20 out of 31 hosts (ASU appeal is the outlier). Remember, that these are just based on our projections and expectations for what we will happen come May 27th. We will release our new projections every Tuesday until the end of the season.

And, don't even ask where Mizzou fits in on the bracket.

♦ Thanks to MU Journalism grad and CNN photojournalist Jeremy Harlan for providing me with some jersey numbers from the early 90's, which I've updated on our historical list of Mizzou Baseball Jersey Numbers. Anyone else who has some jersey numbers to add to our list, let me know at simmonsfield@hotmail.com.