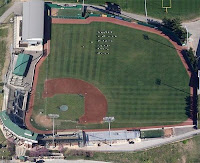 It's time for the annual March home stand for the Missouri Tigers.  This year's isn't quite as long as last season's 19 home games in 27 days, but with the exception of a weekend trip to Tennessee the 22nd-24th, March 2013 does feature 18 home games in 31 days.

Unfortunately, March looks to be coming in like neither a lion nor a lamb, but a polar bear.

As of the time I'm writing this no announcement has been made about the status of the opening weekend with Northwestern, with highs of 32, 32, and 41 forecast.

Tuesday and Wednesday's pair of games against Eastern Michigan are predicted to be taking place in low-to-mid 40s temperatures, with a chance of snow in the forecast for Tuesday.

Hopefully the weather will get better as March progresses.