“We’re going with an ‘aces’ mindset, where it doesn’t matter if you’re pitching on Friday, Saturday or Sunday – when you’re out there, you’re the ace,” Zastryzny said. (KBIA Sports Extra, 2/8/13)

Rob Z is displaying his leadership skills with the 'aces' quote.  But the Columbia Missourian summed it up in their January 27 headline: Zastryzny will be 'the guy' for Missouri baseball.

Tim Jamieson was quoted in mid-January saying, I think he is ready ...The improvements that we did see are his confidence, command of all of his pitches."

Junior LHP Rob Zastryzny is not the same pitcher - not even hardly the same person - as Freshman Rob Zastryzny.  As a newcomer at Mizzou, Rob looked small and underdeveloped, like a high school kid - a young high school kid, actually.  He has added maturity and muscles to his frame, has added skill and command as a pitcher, and has also developed into a true leader of his teammates.

After Rob Z, though, the starting pitcher picture is a little less in focus.

The "man" going into the 2012 season was supposed to be RHP Eric Anderson. Injury slowed him down and then benched him and finally sent him to the operating table, where he underwent Tommy John surgery toward the end of the season. The conventional wisdom said he would not likely be recovered enough to pitch hardly at all in 2013. Eric Sorenson of CollegeBaseballToday.com says in his 2013 SEC Preview, "Apparently, valuable RHP Eric Anderson will sit the bench due to Tommy John surgery and may not be available for the entire 2013 season. Anderson went just 0-3, 4.44 in 2012, but pitched in the prestigious Cape Cod League in summer of 2011 and has great upside."

But surgical technology and rehab have advanced quickly and, just like former Tiger Kyle Gibson, Anderson is on a much faster track back to the starting rotation. He threw to live hitters for the first time at the very end of January. Tim Jamieson has said he is pretty confident EA will be able to be in the rotation fairly soon in the 2013 season. And he says he does not want to put him in as a short reliever first, but plans to use him as a starter, " but it would be for a short period of time, not a real start where you're trying to get six or seven innings out of somebody. To classify him as a reliever would not be the right way to do it." (Columbia Tribune, 1/13/13)

If Anderson can get back up to speed and endurance and effectiveness early, coaches Jamieson and Hobbs are likely to give him a shot at the weekend rotation.


The other big question for the Tiger rotation is Freshman RHP Alec Rash, the highly touted recruit who spurned a 2-round draft offer from the Phillies to come to Mizzou. Will he be ready to step into the starting rotation soon? Jamieson told the Tribune, "It's hard to say, just because we saw him throw one inning in the fall. We've had freshmen, like Max Scherzer, who struggled. Most of those struggles come with command of the strike zone and then handling all the little things — like holding runners and fielding your position. We don't know that about him. We just didn't get a chance to see him with all of that. But we're hopeful he has the capability of pitching on the weekends for us." (Columbia Tribune, 1/13)

A weekend starting staff made up of Junior Rob Zastryzny, Senior Eric Anderson, and Freshman Alec Rash - if they are all healthy and producing up to their potential - would be a staff I'd put up against just about any top 3 in college baseball.

Then again, even if that dream doesn't materialize, there are other good options for the Tigers. Jamieson said, "we've seen all of them improve. Graves and Miles and Platts and Yuengel, they all have a chance — I'm probably leaving somebody out — but they all have a chance to pitch on the weekend." (Columbia Tribune, 1/13/13)

That's Sophomore RHPs Brett Graves, John Miles, and Brandon Platts, plus RS Sophomore RHP Ryan Yuengel.  Those four combined for 15 starts and a 10-8 record in 2012 - 10 of those starts were by Graves.  But the four logged 135.2 innings pitched in 69 appearances last season, adding up to a lot of experience.  Not all of them will figure in the weekend rotation, but in the modern compressed Division I schedule, the mid-week starters are more important than ever, with several 5-game weeks during the season. 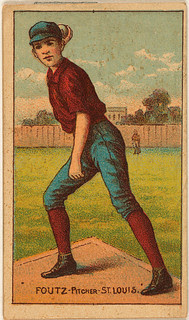 Sophomore RHP Jace James and Junior RHP Keaton Steele were both closers in Junior College, and both were successful at it.  They could be among the best set-up man/closer combo in a while for Missouri.  "Both those guys have got the right demeanor to be out there in those situations," Jamieson told the Columbia Tribune.

There's also an eager group of newcomers who will be jostling for innings:

Every year the Tigers bring in a JuCo transfer or two to provide some experience in the bullpen, and 2013 is no different.  Juniors LHP Andrew Hohn and RHP Jeff Oracion will try to fill that role this season.

A large group of Freshman pitchers have been added to the roster as well.  As always, freshman pitchers come in as big unknowns.  They wouldn't have been recruited by a school like Missouri if they hadn't shown great potential in high school.  but not every prep pitching star is able to make the adjustment to D-I baseball, and those that do can take a while to figure it out.

It's always a guessing game as to which freshman pitchers will make the most of their opportunities and break out of the pack, and which will disappear and become a Mizzou Baseball footnote in the archives.

Roster Cuts pending:  As I pointed out yesterday, at the First Pitch Celebration on Saturday 38 players were introduced.  This weekend there were 38 players on the Tiger roster posted at mutigers.com.  According to the NCAA Division I Manual, the roster limit for Baseball is 35.  This limit has to be reached by the day before beginning of regular season play.

Email ThisBlogThis!Share to TwitterShare to FacebookShare to Pinterest
Labels: 2013