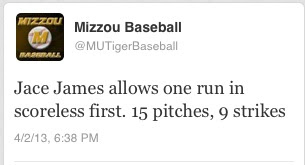 
The Missouri baseball team needed a spark. Coach Tim Jamieson was hoping a change of scenery — a game at Busch Stadium in St. Louis — would do the trick. It didn’t.

“We probably came away with less than what we walked into the ballpark with,” he said, following his team’s 6-2 loss Tuesday night against Illinois
...
That apathy seemed evident following Tuesday’s loss. Outfielder Case Munson, who made a tremendous diving catch in the contest, was all smiles with reporters after the game despite the result...


Some players in the Illinois dugout held their fingers to the sky as the ball was caught for the final out and jumped the fence to celebrate the victory. They knew exactly how long it had been since they’d beat Missouri.

“We’re absolutely aware of something like that,” Lindauer said. “We talked about it yesterday after practice and today before the game. It’s one of those things where you kind of feel like that team has got your number, and you don’t want to keep giving them games. I think we came out ready to go today, and I think it was nice to get a nice win against those guys.”...

Former Mohawk Brandon Platts plans to transfer from Mizzou. Has had some injury problems since HS. He'll land on his feet somewhere.