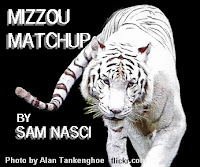 Mizzou takes their second attempt at a home opener in a two-game midweek set against the Eastern Michigan Eagles. The Eagles are 3-7, all of their games either being on the road or at a neutral location. The Tigers are still winless in 2013, and will try and change that against an Eastern Michigan team that has had struggles of their own. Two of their three wins came against Kansas over this past weekend down in Grand Prairie, TX, where they split their series.

In his first year with the team after transferring from junior college, Junior Adam Sonabend is taking full advantage of his opportunity as everyday catcher for this Eagles ball club. He leads the team in BA (.421) and RBIs (9). In his last series against Kansas he hit .500, including going 3-for-5 on Sunday with 2 RBIs. In his 10 games so far, he has as many multi-hit games (4) as he does strikeouts. He enters the series with a 6-game hitting streak.

First baseman and left fielder Jamie Simpson has enjoyed success of his own early in the season, batting .343 and a team-high slugging percentage of .571. Of his 12 hits so far, 4 have been for extra bases, including 2 triples. He is arguably the most important hitter in the lineup, as the three batters that come after him in the order have struggled early on.

True freshman Mitchell McGeein has provided some power for the Eagles early in the year. The Alberta native leads the team with 2 homeruns, and despite his .227 batting average, he is second on the team with a slugging percentage of .500.

Preseason All-MAC First Teamer Sam Ott has not disappointed so far this season. Building off of a First Team All-MAC as a DH last year, he has taken over the duties in right field this season. He is hitting a strong .359 with 1 homerun and 8 RBIs. He has also struck out only 3 times in 10 games to his 6 walks. The redshirt junior also leads the team with 10 runs. Ott is coming into the series red-hot, with 3 multi-hit games in his last 4 contests, finishing off the series against Kansas on Sunday going 3-for-5 with 4 runs scored.

Cleanup hitter Lee Longo has held his own in the middle of the lineup, as he has started the season hitting .333 despite only collecting 3 RBIs. His 5 multi-hit games were highlighted on Sunday when he went 3-for-5 with an RBI and 3 runs scored. Him and Jamie Simpson hold the team lead in total bases with 20.

The only Eagle starting pitcher that did not pitch over the weekend is redshirt senior Kendall Lewis. Lewis has been nothing short of dominant in his first two starts, which is a relief to the team after he missed all of 2012 after elbow surgery. He is carrying a team-leading 1.38 ERA into the series, and was stellar in his last start at Washington State. Against the Cougars, his line was 7 IP, 0 R, 3 K, but got the no decision as the Eagles eventually lost the game 1-0. He has thrown 9 consecutive scoreless innings and has only walked 2 batters all season.

Reliever Taylor Dimmerling is a close second behind Lewis in ERA, having given up only a single earned run in his 6.1 IP (1.42 ERA). He has been a strikeout pitcher in his career, as in 2012 he racked up 19 strikeouts in 13.1 innings of work.

In order to keep the Eagles from racking up a substantial amount of runs, the Tigers will have to go after the bottom of the order. The 7-9 batters in the Eastern Michigan order are hitting a combined .169 this season, whereas the 3-6 hitters are at a staggering .364. Those middle of the order guys do not strike out a whole lot either, so the defense will have to be flawless to keep those guys off the bases.