2011 MU Baseball Preview: What can we expect? 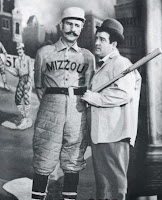 "We've been picked to finish last in the Big 12. That's not gonna happen. I can guarantee you that's not going to happen." (Head Coach Tim Jamieson, at the 1st Pitch Celebration)

". . . And Mizzou does not look good at all. Should be at or near the bottom of the conference." (Fred Katz, CollegeBaseballDaily.com)

The Tigers enter the 2011 season pegged as nearly-unanimous favorites to be . . . mediocre.
Why the tepid enthusiasm?
So, realistically, what can we expect from the Tigers in 2011? There are lots of changes that will impact the season - more than usual going into a new year.

The string of high profile pitchers of the past few years (Scherzer-Crow-Zagone-Gibson-Tepesch) ran into a speed bump last season, which was one big reason the Tigers' string of post-season appearances hiccuped as well.

A look at the 2011 pitching staff, though, shows that Pitching U may be back on track. Junior transfer Matt Stites is a likely high round draft pick - potentially a first rounder if he shines at the D-1 level like some expect him to. Sophomore Eric Anderson was touted as a hot prospect until his season was crippled by injury. And there are at least 2 or 3 of the incoming freshman pitching class that could be scouts' favorites as they develop over the coming three years.

As for the offense, in college baseball every year is a rebuilding year. Every college baseball fan wonders how their team is going to replace the offense they lost from players who were drafted or graduated. And every year, those inconsistent young hitters from the past season turn out to be the matured offensive lynchpins of this year.

The biggest key, though, for getting the Tigers back on the track they were for the previous eight years, is having the patience to let the numerous injured pitchers and players get back to full strength. Most of them won't quite be there on Day 1. But most of them should be contributing at a high level by the time the Big 12 season gets underway.

The key will be to find ways to manufacture enough wins in the first month of the season to keep from digging a hole too deep to climb out of. Part of the answer for that may be to shift a rehabbing pitcher (Anderson) and a rehabbing outfielder (Opel) to cover the biggest infield hole (1B) as a way of working their arms back into shape for their real jobs.

After a season-starting schedule against some pretty decent teams (USC, North Carolina and Charlotte are all likely NCAA Regional teams) MU has a very winnable schedule between the beginning of March and the heart of the Big 12 season, featuring a mixture of some halfway decent teams (e.g., Texas State, #49 in the final 2010 NCAA RPIs) and some halfway indecent teams (e.g., Central Arkansas, #215). This should provide plenty of time and plenty of competition to get some of the injured Tigers back up to peak condition, plus time sort out the pitching staff and the daily starting lineup to see who has the right stuff to lead this team toward the post-season.

It's worth coming out to the ballpark in 2011 if only to see how the team's philosophy changes under the direction of new assistant coaches Matt Hobbs and Kerrick Jackson. TJ is still The Man, but it's often the assistants who are interacting with the players most closely, getting in their heads. If nothing else, the change will give the returning players a new perspective on things.

Sources tell me Hobbs has really injected a new attitude and approach into the pitching staff already. And Jackson has proven himself a sharp judge and developer of talent.

Personally, I want to see which of them steps into the role vacated by Tony Vitello, that of most-likely to spontaneously start waving his arms and yelling at the umpires.

2010 was the year for freshman position players. 2011's freshman class is dominated by young pitchers.

Part of the fun of college baseball is watching the young players come in from high school, full of enthusiasm, ready to conquer the baseball world. And then we get to see which ones live up to their potential and which ones don't.

This pitching class is full of possibilities. How the team fares this season could rest on how quickly these young arms develop and make an impact.

There's been an abundance of articles and blog posts about the new BBCOR bat standards that go into effect for the 2011 season, which reportedly take a lot of the pop out of the metal bats.

On the one hand, this should be good for those baseball purists who say they don't like college baseball because of the "fake" home runs off the pinging metal bats. They're still not wood, like Stan the Man used to swing, but there really should be no more excuses to stay away because of the bats.

And the scouts should have a bit easier time of telling who has real power versus college power.

On the other hand, a lot of college baseball fans, coaches and players have gotten quite accustomed to the ping of the bats, the Punch-and-Judy homers and the high scoring games. There's even a college baseball message board called PingWits, reveling in the difference between the college game and the pro game.

And the college pitchers will learn that perhaps they really can start to pitch inside and jam up hitters, just like the Big League pitchers do.

According to a Trib article by Matt Nestor, Missouri baseball puts emphasis on bunts, stolen bases. This is a good thing. Hopefully it will make a difference, because I have to be honest - Two things that have characterized MU Baseball in recent years have been an abysmal bunting success rate, and a tendency toward Base Cadets getting into trouble on the base paths. Not since Jayce Tingler (00-03) has Mizzou had a player who really excelled at both of those small-ball skills. Some emphasis in those areas could really do the team some good.

As Tim Jamieson said on KFRU's The Closers, the team used wooden bats in Fall practice while they waited for the new bats to arrive. The reasoning was that the players would find the new metal bats to be much more lively than the wood they had gotten used to, whereas going from the the old metal bats to the new ones would have felt like going to a deader bat.

Count me as a fan of the new bats if they really do usher in an era of small ball (with the caveat that this whole thing could turn out to be much ado about nothing). I became a diehard baseball fan during the era of Whitey Ball in St. Louis, and a team that manufacturers runs can be a very exciting team to watch.

Tim Jamieson said on KFRU's The Closers that while the team has lost a lot of power in the departure of Senne and Nicholas, it may be that Schmidt, Brown and Opel have more power than those guys, but they just have to grow into it, and he mentioned that those guys are slated to be in the middle of the lineup, along with Mach and Garcia contributing strongly in the lineup.

There are plenty of question about who will be the starters and how the season is going to play out.

In parts 2 and 3 of our pre-season preview we'll take a look at the Tigers' position players and at the pitchers and try to get an idea of what the 2011 Tigers will look like.