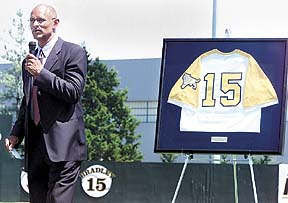 Phil Bradley (79-81) is back at at the University of Missouri.

The former Tiger quarterback and baseball player has been named a volunteer assistant coach for the Missouri softball team. Bradley, the Missouri starting quarterback in 1979 and 1980, made his Major League Baseball debut in 1983 with the Seattle Mariners. Bradley was an All-Star in 1985 as a Mariner. He also played for the Baltimore Orioles, Philadelphia Phillies and Chicago White Sox before his career ended in 1990. He will work specifically on hitting with Missouri softball coach Ehren Earleywine.

■ St. Louis University has released their 2010 Schedule, and Mizzou is NOT listed.

MU in the Minors

The RailCats announced some team awards in a pregame ceremony. Closer Andy Shipman (03), claimed off waivers from Kansas City early in the season, is the Pitcher of the Year.

Email ThisBlogThis!Share to TwitterShare to FacebookShare to Pinterest
Labels: 2010, Mizzou Baseball, MU in the Minors, Schedule