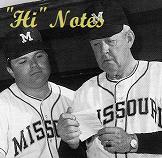 ♦ We posted last week about Word on the Tweet rumors of possible changes being talked about at the ABCA Convention in Chicago, with many of those tweets coming from Kendall Rogers of Perfect Game (@KendallRogersPG). Kendall now has an article up at Perfect Game with more details about the things he heard. Well worth clicking the link and reading the whole story: ABCA convention rewind (PerfectGame.com)


"This is for prospect student-athletes, those in high school or in the junior college ranks," Lennon said. "In this case, they might be able to have agents and advisors allowed in negotiations. We're prepared to put forth this idea for the council to consider."

A swift change of opinion on the agent-advisor relationship was only the tip of the iceberg for Lennon and the NCAA at the convention, as they also announced the NCAA is in the midst of some significant deregulation across the board, putting more of the responsibility regarding NCAA rules and regulations on member institutions.
...

♦ Baseball America's Aaron Fitt (@AaronFitt) was also a frequent tweeter at the ABCA, and he follows up with his ABCA notebook and a focus on Livelier Balls Discussed At ABCA Convention (Baseball America) (also well worth clicking the link and reading in its entirety)


Clemson coach Jack Leggett led the push for switching to the professional ball this fall, prompting Keilitz to study the issue. Currently, Keilitz said, the NCAA does not mandate any ball standards for regular-season play except that the ball’s coefficient of restitution (COR) cannot exceed .555. The higher the COR, the farther a ball will travel. Professional baseball uses a ball with a maximum COR of .578.

In the NCAA tournament, games must be played with an official Rawlings ball with seams that are higher than the seams of a pro baseball. For that reason, college conferences generally use the raised-seam ball during the regular season to prepare for the postseason.

Leggett sent a letter to coaches across the country in the fall. He said about 55 coaches responded to him, and all but one supported his proposal to switch to the minor league ball...

♦ And rounding out our pocket-full of change, there's John Infante (@John_Infante) with Breaking

Down the NCAA’s First Steps Toward Deregulation (The Bylaw Blog on AthleticScholarships.net

)
On January 19, 2013, the NCAA Division I Board of Directors will meet at the NCAA Convention. It should be a significant day in NCAA history. The board will likely adopt 26 proposals that represent the most sweeping deregulation of NCAA rules ever attempted in a single stroke. The proposals touch on staffing, off-campus recruiting, phone calls, text messaging, minor academic rules, and a good portion of the extra benefit legislation.
...An example of one of the 24 proposed regulations he covers:

Would allow schools to treat prospects like student-athletes for purposes of applying recruiting regulations once a National Letter of Intent or signed offer of admission or financial aid is received.

Details about this proposal are scarce. A “Points to Consider” document does not include any more explanation. But saying that athletes are student-athletes once they sign an NLI opens up a can of worms about what that status means.

Odds of a fight: High. The extra benefit language in the proposal is too unclear. I would expect a significant number of override requests.


Sand volleyball is a spring team sport. The Division I playing season starts the first Thursday in March and ends eight weeks later or the end of the school year, whichever comes first.

♦ And lastly, a look at a new recruit:

Email ThisBlogThis!Share to TwitterShare to FacebookShare to Pinterest
Labels: College Baseball, Compliance, NCAA, Other Sports, Rules of the Game