Over the next six months we're going to aim our virtual jalopy South by Southeast on the Information Highway to see what we can learn about our new Southeastern Conference opponents.  The Stitch-Head Baseball Tiger is behind the wheel and he'll tour the SEC towns and ballparks, get to know the fans of those SEC teams, and find out what we can about the history, the coaches and the personality of the SEC teams.

There are plenty of other resources to learn about the SEC.  Every sports writer, every blogger, every message board pundit will be taking a look at the SEC over the next few months.

RockMNation has already begun taking a week at a time to poke their nosesinto teach of our new SEC rivals.  KFRU's The Closers have been following the same schedule in talking to experts and observers of those same SEC teams.  There's even a book by the Columbia Tribune's Dave Matter, The Mizzou Fan's Survival Guide to the SEC.  I recommend you take a look at that book, especially if you're an SEC football fan.  And occasionally there's a chapter that has a paragraph or two about basketball. And maybe a sentence about baseball.  Just so it does take too many inches away from talking about football.

But here at SimmonsField.com we con't care about the minor sports, like football and basketball.

We'd rather hear about Ron Polk and Skip Bertman than Bear Bryant or Robert Neyland.

We care about Baseball.

Back in late September, 2011, I said this on Tigerboard:


Worst part about going to the SEC . .

I know a lot about Big 12 Baseball and all the teams. I can name all the stadiums and coaches. I know their history. I know where the best and worst blogs and message boards are. I know who the Big 12 umpires are.

I'm going to have to learn all that kind of stuff from scratch. Well, not completely. I do know a few things about SEC baseball, but the learning curve is going to be huge.

But that's not the worst thing.

The worst thing is I'm not sure I care enough to make the effort.

Turns out I did care enough.  And I cared even more as I spent hours wandering the blue highways of the internet learning about our new neighborhood.  There are some crazy people and towns and traditions in SEC Country.  Buckle up for a wild ride.

Our route would take us 3,750 miles if we were to take the actual asphalt and concrete roads.  The longest leg of that journey would be 500 miles from Fayetteville, Arkansas, to College Station, TX. 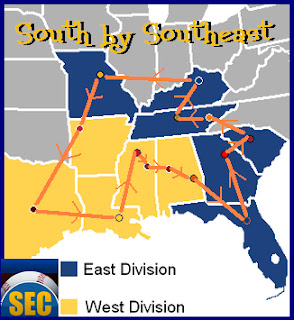 And be sure to check out the SEC Dixie-nary series we did last year during the off-season.  This time we're going to look more closely at each of our new SEC rivals.

Our first destination is Fayetteville (one of 5 "villes" in the SEC), starting tomorrow.

Pack your bags.  Don't forget the beef jerky.  And be sure to bookmark the list of Chick-fil-a locations on our route.

Email ThisBlogThis!Share to TwitterShare to FacebookShare to Pinterest
Labels: SEC, South By Southeast