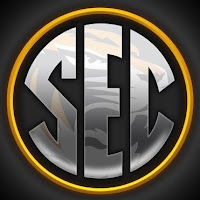 We've been piecing together the 2013 schedule from various bits of information picked up along the way.

A fan on Tigerboard.com drew my attention to the posting a week ago of Southeast Missouri State's schedule, which includes a Tuesday, April 30th visit to Columbia to play the Tigers.

♦ The Columbia Tribune today reported MU baseball to play series at Southern Miss. Tex and Hunter mentioned on the air toward the end of the 2012 season that MU's opening series in 2013 will be in the middle of SEC country at Southern Mississippi, a pretty good Conference USA team (32-24 in 2012)

♦ SEC Schedule: The SEC released their 2013 Baseball Schedule a couple of months ago (unlike the Big 12, which has always kept such information tightly held)

♦ Mention has been made this past season that both the San Francisco series and the Memphis series are home-and-away agreements that will bring USF to CoMo for a weekend in 2013 and send Missouri to Memphis for an away weekend series in 2013.  Memphis has released their official 2013 schedule, which verifies the February 22-24date of Mizzou's series with Memphis as we previously posted on the schedule below, and San Francisco also has posted their schedule, confirming the March 8-10 series we had previously posted.

♦ Because of the length of the SEC schedule, there will only be 4 weekend non-conference series at the beginning of the season. Since MU usually plays on the road until March, we can expect only 2 home series prior to the beginning of SEC play.

♦ A follower of SimmonsField.com reminded me that Tex said the home opener will be March 1st against Northwestern.  That fills in the last question mark for the weekend series schedule.